I have had the strangest experiences with petrocosmeas this winter. The older ones that have done well for 2 or 3 years are all suffering, and P. forrestii has had a near death experience. I had to take i 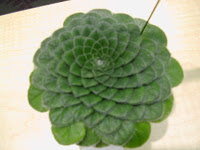 t apart and restart it. There are 2 new plants from little offsets I planted up this summer that are still very small. The rest of those leaves failed, but leaves of P. G25KC00 [not rosettifolia as some plants are labelled] started several new plants in just a couple months.

Messages on gesneriphiles confirm that this Petrocosmea, P. G25KC00, produces new plants from leaves easily. My new plants that lived from the convention and from another local grower are growing fast [for Pets] and they have lovely flat rosettes. They seem to prefer brighter light than than older ones, warmer temperatures, and all of them are planted in little cylinders to let the leaves stick out over the sides. It's very tricky to keep them moist but not wet.

I'm still learning how to get the little offsets going, and they seem to grow so slowly. I can't give them the very cool temps in the winter that are said to cause prolific blooming. I think these and the mini Sinningias would be the most popular gesneriads for AV growers. They take up very little room, they will grow under lights or the right windowsills, and can be easily propagated. So much fun in so little space!

Many thanks to Charles H. for this article. Please remember to leave comments and questions for the authors.
Posted by NSAVC Twin Cities at 3:37 PM 2 comments:

What could chase away thoughts of falling snow and wind chills better than a spring flower show? Lots of lovely plants, all that bright color.... sale plants just waiting to be taken home!

Three of the Twin Cities' plant clubs have shows that are coming up in the next few weeks. Please come and visit them all!

The club's would like to invite everyone to come and share the fun.... see the wonderful plants, find out what's new, visit with friends! Hope to see you there! PS: Please see the side-bar to the right for contact information for all of the clubs!

My husband says the difference between dirt and soil is that you have to pay for soil. I have been making my soil mix for years. It does not have any dirt from the outside in the mix because it is too heavy and may have bugs.

There are as many recipes of mixes of soil as there are recipes for meat loaf. A basic recipe calls for 3 parts sphagnum peat moss, 2 parts vermiculite and one part perlite. Many add other ingredients 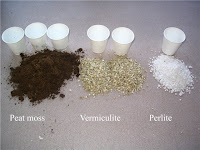 such as lime. My water has a very high ph so I do not add any lime.

I use a 3-2-1- mix for all my plants except streptocarpuses where I use 3 parts sphagnum peat moss, 2 parts vermiculite and 2 parts perlite. It is a very light mix but the streps are sensitive to being over watered and with the extra amount of perlite they seem to thrive on it. 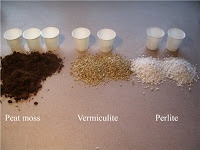 Peters Sunshine Peat Moss is getting harder to find in the area where I live. I have been told by store owners that the brands they carry are from the same geographical area that Peters is produced in but I have been skeptical to try it. The old saying is "If it ain't broke don't fix it".

The vermiculite I like to use is course. Again ,it is hard to find but I tried the horticulture vermiculite and it was seemed much too fine and the soil seemed to stay too wet. The best time to find both the peat moss and the vermiculite is in the spring when all garden centers carry lots of supplies.

In the fall I make many bags of mixes and store them in the garage. I live in a very cold climate and peat moss freezes and I have been known to be chopping peat moss in a garage when it was -20 below. Now when I am short of a soil mix all I need to do is run out in the garage and grab a bag of the premixed.

When I bring a bag inside the house, I let it thaw, add water and mix and mix until I think my arms are going to fall off. I like to make sure the peat is evenly distributed and finely shredded. No matter how careful I mix it, the perlite seems to float to the top of the mix so I keep a small container and can add extra perlite if I think it need 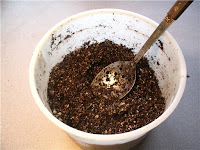 To me the real advantage of making my own mixes is that I know exactly what is in the mixes. There are no surprises added by an outside source. I am not sure if it saves any money doing it myself and it is time consuming but it is exactly the way that I like it.

Many thanks to Sharon Johnson for the article and pictures! Top photo is the basic soil mix ingredients, the middle photo shows the strep mix with 2 parts perlite, and the bottom photo is what a good mix should look like completed.

Posted by NSAVC Twin Cities at 8:46 AM No comments:

Are you excited about seeds? Like to grow your plants "from the ground up", so to speak? Well the folks at the Twin Cities chapter of the gesneriad society are getting a chance to do just that. A variety of different gesneriad seeds from Brazil were passed out to the members present at the January meeting that were interested in trying some propagation of rare and unusual plants. I got some seeds from Sinningia araneosa. I'll begin taking pictures when I sow the seeds so we can watch the progress as they germinate and grow over the next few months.

Mauro Peixoto, from Brazil, has been collecting and researching a variety of plants including many from the gesneriad family. His work in important for anyone interested in horticulture and conservation, but especially for people interested in gesneriads! From an excerpt taken from a yahoo group notification passed on to me from C. A., he says:
I'm very proud to say that thanks to your precious help, I was able to
increase the greenhouse area from 340 to 420 square meters and
transform about 2000 square meters from my back yard into a garden of
native Passifloras and Aristolochias.

The seed list grew from 28 Plant Families and 390 listings to 34
Families and 589 listings.

I still didn't finish the inventory of the living collection , but it
surely grew in more than 200 species. I'm currently working on it and I
hope to have it ready by February or March and will post the list in
the `Files' section

Seeds from several new species were sent to the members.

Clubs or individuals can subscribe to a yearly membership that entitles you to receive a sampling of Mauro's seeds three times a year. What a fascinating way to increase your collection and grow something that might be truly unique in the U.S. Mauro Peixoto's work is vital in cataloging, researching, conserving and preserving plants that in many cases are all but unknown. Mauro's website is at http://mpeixoto.sites.uol.com.br/index.html

The local gesneriad club meets on the fourth Tuesday of the month near Hamline and #36. Email the blog for more details about the AGGSTC or for information about joining.
Posted by NSAVC Twin Cities at 6:54 PM No comments: 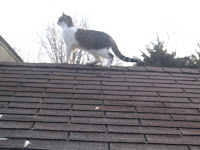 Once upon a time, there lived a tiny cat. Like most tiny cats , he had a rich life of eating candied mice and sleeping on cushions of the finest silk. But one day, our tiny cat decided that he was not as well known and as famous as he should be! After all, wasn't it HE that was king of all he surveyed? Wasn't it HE that controlled everything that went on in his tiny kingdom?

He started to think to himself that perhaps a quest was in order! He would conquer the famous beast 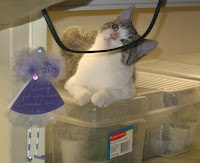 that lived in the Violet Gardens of Tranquility, which were at the north end of his kingdom. He would rid, once and for all, the gardens of the monster tha 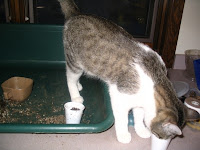 t was fabled to live there. This feat should surely win him the attention of the people (and their love and gratitude too!) There might even be gifts of candied rats and small balls of mylar lavished on him from the amazed and grateful citizens.


So after preparing himself in mind 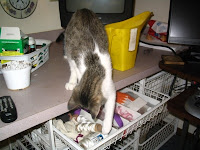 and body... a quick snack of some kibbles... he went to the gardens to search.


He looked high, and he looked low. He even looked in the small little places that sometimes hid just the thing that you are looking for. 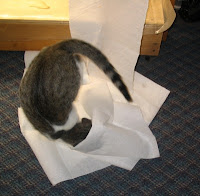 Suddenly, he came upon a great beast of such ferocity that he immediately steeled hi 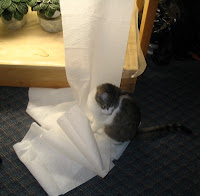 mself and took to battle it.

It was large and white, long and ferocious.... it fought him with all it's long tentacles! He rolled and kicked and fought with it. It just seemed to keep coming at him. He was afraid!

ter hour he fought the beast and eventually when the battle was over, he sat still in the silence that followed, just looking at all that remained of his once fearsome foe. He had won!!! Huzzah! Now, there would be a celebration!

Back to the kingdom the tiny cat went for a proper meal of some "tasty greens" and some rest sleeping under the warm, soothing rays of light waiting for his people to "congratulate" him on his day's efforts!

I guess it just goes to show you that the old adage really IS right; "One man's work IS another cat's folly!"
Posted by NSAVC Twin Cities at 9:23 AM 3 comments: 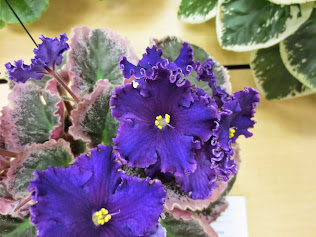 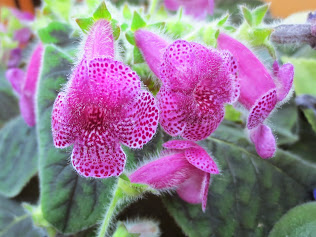 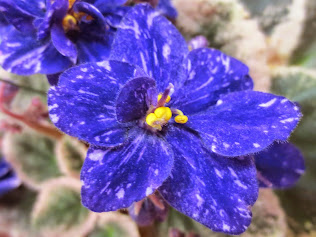